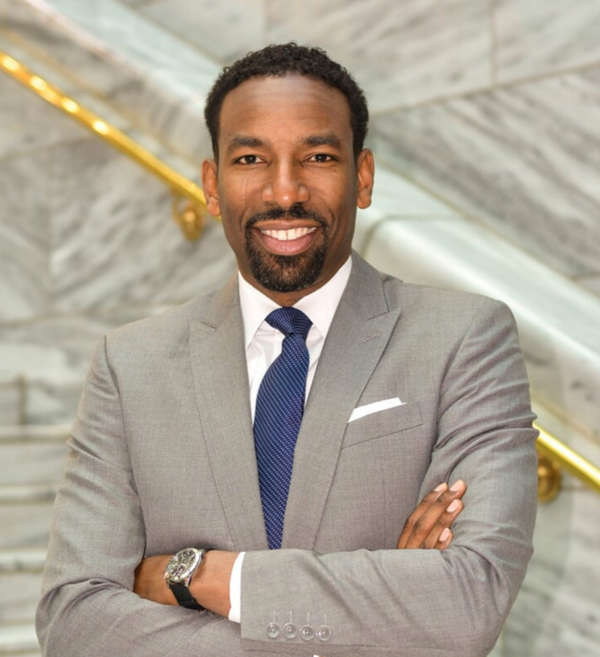 In today’s post, we’re spotlighting one of our own: TechBridge Community Impact Leader for Georgia Andre Dickens. We are inspired by Andre’s story and by his lifelong desire to improve the lives of those around him through community leadership.

A fifth-generation Atlantan and proud graduate of the Atlanta public school system, Andre Dickens is a rising star in the local political scene. His inspiration to help others was ignited early in life and finds its roots in the role models he had as a child. Andre was raised by a strong single mother who was in touch with the people around her and, as an avid reader, always up to date on current events. He tells the story of how when he was a kid his mom would stop to chat with everyone she knew at the grocery store or in the parking lot. Sylvia Dickens would run into friends and neighbors who would strike up a conversation with her while he stood by tapping his foot during the seemingly interminable conversations. He regarded it as a nuisance at the time, but his mom’s involvement instilled in him a desire to get to know people and an awareness of his community’s needs.

Thanks to his mother’s intense interest in the community, Andre realized that Atlanta had a lot going for it and had the potential to be a great city, with the right leadership. While many of us are still trying to figure out what to be when we grow up, Andre knew even before he graduated from high school that he wanted to be mayor of Atlanta. Former Atlanta mayor Shirley Franklin, a family friend, encouraged his dreams.

In addition to setting the stage for his career in public service, Andre’s mother also receives his credit for keeping him motivated in school and moving him in the right direction. Andre was the first in his family to attend and graduate from college, earning a chemical engineering degree from Georgia Tech. Andre says that college allowed him to experience diversity for the first time. Taking a page from his mother’s playbook, he loved to talk to the students in his dorm about where they came from and about their life experiences. His enthusiasm for talking with people landed Andre a great job in sales right out of college. He later put his sales skills into practice as an entrepreneur, opening a successful local furniture store.

Outside of work, Andre describes himself as constantly giving and doing. At the same time, he took steps toward his dream of a political career. He coached basketball at the YMCA, volunteered at his church and through The United Way, and became an NPU representative for his neighborhood. He was elected to his current position of Atlanta City Councilman Post 3 at Large three years ago and has spent his tenure focusing on affordable housing, youth educational opportunities, transportation, and workforce development. Andre has also served on the board of the Atlanta Beltline, Invest Atlanta, and the Center for Human Rights.

Andre became friends with TechBridge CEO James Franklin at Leadership Atlanta and learned more about our organization. Because he’s convinced that innovation will help people in poverty in our city, he was drawn to TechBridge’s mission of alleviating economic distress by helping nonprofits become more impactful through technology. Working with us was a logical next step in Andre’s public service career. He also appreciates how his position at TechBridge allows him to simultaneously support many of the community concerns that vie for his attention as a city councilperson.

Andre believes in TechBridge’s focus on community building through meaningful collaborations. He offers words of encouragement to others in leadership roles, saying that he would love to see Atlanta’s IT community contributing their time and skills to serving others, and adds that TechBridge can set the standard for how collaboration can happen. If you can help, do it. We’re all important, and we all have something to contribute. When it comes to giving and doing, we’re #BetterTogether.

TechBridge is proud to have assisted so many organizations on the front lines of social change in our communities — alleviating homelessness, fighting poverty, helping kids do better in school, making sure seniors get proper meals, and so much more.

We created the #BetterTogether campaign so that we can showcase some of the important efforts of the nonprofits and people we’ve worked with. And because social change is a community effort, we also wanted to showcase the generous sponsors, amazing technology partners, tireless volunteers, and TechBridge staff who enable us to do our work.

We feel that these stories exemplify the transformational work that can happen when organizations and individuals work hard — together — towards a common goal. We hope that hearing these stories is as inspirational to you as it is to us.

The Women in Tech You Never Knew You Needed to Thank

Salesforce Nonprofit Case Management: Why Your Nonprofit Needs It Yesterday

December 14, 2021
Success for a nonprofit is defined by achieving your organization’s founding mission through expansive community...
Nonprofit Salesforce

November 15, 2021
The end of 2021 is approaching, and your organization is likely gathering financial data to...
Nonprofit Success Pack

TechBridge
Donate
What We Do